Hyde Park in Upper Arlington has been hosting live jazz every weekend for many year here in Columbus. The location is known for its cozy fireplaces, quaint, romantic private dining areas and live jazz in the lounge. In fact, this Hyde Park has achieved a legendary status in Columbus, known over the years as the place to be seen with visiting dignitaries, national celebrities, and famous sports figures. Pianist Mark Flugge and his trio have been performing every Friday night for many years now and Richard Lopez is a typical mainstay for Saturday nights. This fall, Hyde Park will be showcasing a wide variety of excellent piano trios in addition to Mark Flugge and Richard Lopez.

Dave DeWitt – Dave is one of the most “in demand” musicians in the Columbus music scene. As a bassist, he can be found as a member of a number of local groups, and is a gifted pianist in his own right. He brings great musical depth to each performance. 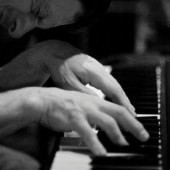 Jim Maneri – Jim Maneri has been a full time working professional musician for decades and has played thousands of concerts and gigs in most every big city in North and South America. Currently Mr. Maneri writes music for TV, film, video and websites, travels some as an accompanist for singers, plays jazz gigs and teaches privately. Mr. Maneri has done hundreds of recording sessions, written hundreds of compositions in all styles from jazz to funk to trance to classical, can teach and play almost all instruments and voice with experience and expertise, and always has a yoyo in a holster on his belt.

Bobby Floyd – Bobby has performed extensively in the U.S., Canada, Europe and Japan. Touring events include major jazz festivals, concert halls, and numerous night clubs with Ray Charles, Jeff Tyzik, Chris Howes and Sarah Morrow. The prestige associated with Floyd’s international appearances can also be witnessed at home. In his hometown, Columbus, Ohio, Bobby has been a feature with the Columbus Jazz Orchestra, The Columbus Symphony, and ProMusica Chamber Orchestra sharing the stage with Dionne Warwick, Doc Severinson, Artural Sandaval, Faye Robinson and many others. He has also appeared in a variety of performances opening for Spyro Gyra, Smokey Robinson, Stanley Clark and George Duke, as well as accompanying other artists like David “Fathead” Newman, Bobby Watson, Greg Osby and Billy Hart.