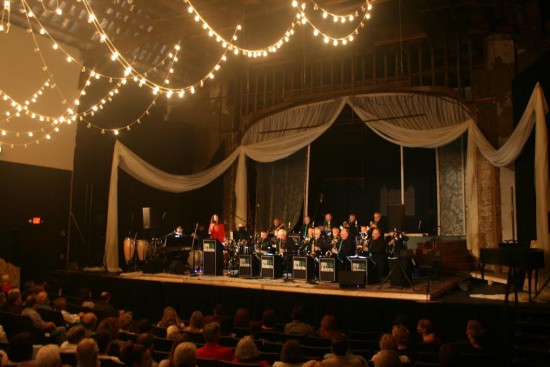 The Emerald City Swing Orchestra provides musical entertainment to the Dublin and Central Ohio communities, while endeavoring to contribute to the preservation of the quintessential American art form, big band music. We showcase the original big band form that represented popular music in the era before, during and after the Second World War, as well as several variations that have evolved in the decades since.

The Emerald City Swing Orchestra has an extensive library of ballroom dance music and performs the last Friday of every month at the Emerald City Ballroom in Dublin.

The Emerald City Swing Orchestra is proud to present a concert series featuring our friend, Columbus native and current Santa Clara, California trumpeter and big band leader Ed Morrison. With Ed, we are paying tribute to the big bands of Doc Severinsen, Maynard Ferguson, Buddy Rich, Stan Kenton, Arturo Sandoval, and Wayne Bergeron. These artists and their bands were essential in rejuvenating big band music following the end of the big band era after World War II. These are the bands that several members of ECSO cut their teeth on as young aspiring musicians in the 1960’s and 1970’s. We have presented two installments in the series.