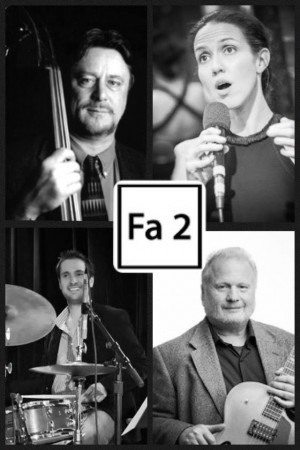 Antoine Fatout (bandleader/drums)
Growing up in France, Antoine studied classical percussion and drums. It was only upon his immersion in the rich Brazilian cultural scene of Boston, MA that he fell in love with Brazil’s music. While studying jazz and Latin music at the Berklee College of Music in Boston, Antoine had the opportunity to study and perform with the top musicians of the city at the hottest clubs in town. Now a resident of Columbus, he has gathered the best Brazilian and Jazz performers of the area under his direction and hopes to bring the infectious rhythms and joy of this music to Ohio!

Maggie Green (vocals)
During her early years, Maggie studied the complex harmonies and melodies of Bach, Mozart and Beethoven. However, while pursuing a degree in classical piano at Michigan State University, her ear began to wander toward jazz music. This proved to be a significant, for she not only moved from classical music to jazz, but she also strayed from the piano and focused on her voice, thus enrolling at the Berklee College of Music in Boston, MA. While at Berklee, Maggie honed her jazz skills and began to delve into Brazilian music. Studying with vocalist Mili Bermejo, she became fascinated with the syncopated rhythms of Brazil. After graduating from Berklee in 2000, Maggie moved to Columbus, Ohio and began establishing herself as a vocal artist. Following a string of performances in the region including the Columbus Arts Festival, the Columbus Jazz and Rib Fest, the Columbus Latino Festival as well as many night club dates, Maggie began to make appearances outside of Ohio, performing at festivals and clubs from Massachusetts to California.
Continually inspired by Brazilian rhythms, Maggie made her first trip to Rio de Janeiro in 2005. She immediately struck up a musical friendship with pianist Marcos Ariel. The two collaborated on a show, “Rio-New York Connection,” featuring NYC saxophonist Joel Frahm, Brazilian drummer Jurim Moreira, and bassist Andre Neiva. They played two sold-out shows in front of enthusiastic Rio crowds – a highlight of Maggie’s career.
In 2007, she returned to Rio and recorded an album of Brazilian music featuring renowned artists Luiz Avellar, Kiko Freitas, Marcos Ariel, Jurim Moreira, and others. This recording stands as a testament to her immersion in bossa nova and samba music.
During the fall of 2007, Maggie teamed up with Brazilian guitarist Nelson Faria, drummer Kiko Freitas and American bassist Scott Gold for a series of concerts in the US. The group received rave reviews and standing ovations for their performances in spots like Cleveland’s Nighttown and the Jazz Factory in Louisville, KY.
As an educator, Maggie has served on the jazz faculty at Capital University. She has also presented vocal workshops at various schools and universities throughout the United States, including the Antonio Adolfo School of Music in Hollywood, Florida. Maggie holds a degree in Professional Music from the Berklee College of Music.

Roger Hines (bass)
Roger Hines, bassist, has logged many miles on the road during his 30 year career as a musician. From 1980-1987 Roger toured and recorded exclusively as bassist for legendary singer Ray Charles. This close relationship with “The Genius of Soul” continued until Brother Ray’s passing in 2004. Hines also toured as musical director for Grammy Award-winning jazz vocalist Diane Schuur from 1988 to 2004. He teamed up with Ms. Schuur as an artist in residence and educational clinician at many colleges and other educational venues throughout the U.S. and abroad. Hines has also performed with many other well-known artists and ensembles including Louie Bellson, the Cab Calloway Orchestra, Ann Hampton Callaway, Johnny Coles, the Count Basie Orchestra, Rosemary Clooney, Eddie Daniels, Billy Eckstine, the Duke Ellington Orchestra, Frank Foster, Sir Roland Hanna, Eddie Jefferson, Hank Marr, Zoot Sims, and Ernie Watts.
In addition to performing, Roger also taught bass at the Ohio State University School of Music as a jazz studies faculty member for many years. He is currently a professor in the Conservatory of Music at Capital University.
Roger received a B.M. in Music Theory/Composition and a M.A. in String Pedagogy from The Ohio State University. He studied bass with Dave Holland and composition with Brazilian composer Moacir Santos. Hines’ playing is featured on recordings with Ray Charles, Diane Schuur, Etta Jones, Ernie Krivda, Gene Walker, and recently with his group Madrugada and guitarist Stan Smith, both on Cojazz Records.

Stan Smith (guitar)
Guitarist/composer Stan Smith is an assistant professor of music in the Jazz Studies/ Music Industry Program at Capital University in Columbus where he has been the head of the Jazz/Contemporary Guitar curriculum since 1978. He is also on the staff of the National Guitar Workshop. As a guitarist, he was a member of the Moacir Santos band in Los Angeles and as a band leader in Columbus he has accompanied various artists such as Ali Ryerson, Mark Vinci and David Amram, as well as performing regionally in clubs, concerts, and festivals.
As a composer he has received Fellowship Awards from the Ohio Arts Council and the Greater Columbus Arts Council. Smith’s compositions have been performed internationally and recorded by the Columbus Jazz Orchestra, Michael Cox, The Keith Henson Octet, The Afro Rican Ensemble, and Spectrum. He is featured as a guitarist and composer on Madrugada’s self titled CD on the COJAZZ label. Stan has released several CDs under his own name including “Pathways”, “No Discussion” and “Silent Memory.” He is the author of “Jazz Harmony on the Guitar, A Linear/Structural Approach” published by Hal Leonard.