Jazz Great AL JARREAU to Perform with the CSO March 9

Al Jarreau’s unique vocal style is one of the world’s most precious treasures. His innovative musical expressions have made him one of the most exciting and critically acclaimed performers of our time, earning him seven Grammy Awards, scores of international music awards, and popular accolades worldwide.

The Columbus Symphony presents Al Jarreau at the Ohio Theatre (39 E. State St.) on Saturday, March 9, at 8pm. Tickets are $25-$65 and can be purchased at the CAPA Ticket Center (39 E. State St.), all Ticketmaster outlets, and www.ticketmaster.com. To purchase tickets by phone, please call (614) 228-8600 or (800) 745-3000. The Ohio Theatre Ticket Office will also be open two hours prior to each performance. Young people between the ages of 13-25 may purchase $5 PNC Arts Alive All Access tickets while available. For more information, visit www.GoFor5.com.

Al Jarreau has been singing since the age of four, harmonizing with his brothers and performing solo at a variety of local events in his hometown of Milwaukee. Enrolling in Wisconsin’s Ripon College, he continued singing for fun, and graduated with a BS in psychology. After moving on to the University of Iowa to earn his Master’s in vocational rehabilitation, Jarreau relocated to San Francisco to begin a career in rehabilitation counseling.

In San Francisco, he found himself performing at a small jazz club, and by the late ‘60s, knew he would make singing his life. Relocating to LA, he began his apprenticeship in such famed nightspots as Dino’s, the Troubadour, and the Bitter End West. Shortly thereafter, he branched out to NYC, where he gained national TV exposure with Johnny Carson, Merv Griffin, David Frost, and Mike Douglas. Jarreau teamed with guitarist Julio Martinez to “spell” up-and-coming comics John Belushi, Bette Midler, Robert Klein, David Brenner, Jimmie Walker, and others at the famed comedy venue, The Improv.

In 1975, Warner Bros. Records spotted Jarreau and signed him to a recording contract. His debut album,
We Got By, was released to unanimous acclaim. He was awarded a German Grammy for Best New
International Soloist that same year, and earned a second German Grammy with the release of his follow-up album, Glow.

Jarreau’s career breakthrough came in 1977 when he released his live double album, Look to the Rainbow, which was culled from his first world tour from that year, and earned the vocalist his first Grammy for Best Jazz Vocal Performance. 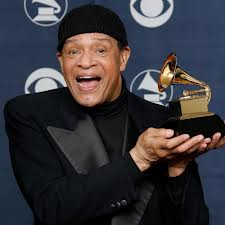 His fourth album, All Fly Home, was released in 1978 to further accolades and a second Grammy for Best Jazz Vocalist. It was followed by a string of innovative and original offerings including 1980’s This Time and the million-selling Breakin’ Away which brought him a broader audience and two more Grammy awards for Best Male Pop Vocalist and Best Male Jazz Vocalist.

In 1983, Jarreau was released followed closely by High Crime, spawning a string of R&B and pop hits. Al Jarreau-Live in London, continued to solidify his reputation as a world-class master of both studio and stage.

Jarreau then teamed with top producer Nile Rodgers for L is for Lover, introducing new styles and sounds to his repertoire. In 1977, he continued to top the stateside charts and became a weekly guest in America’s living rooms singing the Grammy-nominated theme song for the hit television series “Moonlighting.”

He then released Heart’s Horizon which included the #2 R&B smash, “So Good” and earned him another Grammy nomination, this time for Best R&B Album. After touring for nearly two years, he returned to the studio to fashion the sound that would launch him into his third decade of music-making. The result was 1992’s Heaven and Earth for which he received his fifth Grammy for Best R&B Vocal Performance. With this, Jarreau became one of the rare artists to have won Grammys in the three categories of jazz, pop, and R&B.

In 1994, he released Tenderness. In 1996, Jarreau accepted a three-month stint on Broadway playing the role of the Teen Angel in Grease! Other acting credits include guest star appearances on FOX’s “New York Undercover,” NBC’s “Touched by an Angel,” and a national McDonald’s commercial.

In 1999, Jarreau teamed up with symphony orchestras throughout the US and Europe and began to perform his most popular hits and some favorites from Broadway and the classics.

In 2001, he added a new chapter to his 25-year recording career with Tomorrow Today. Also that year, he received a star on the Hollywood Walk of Fame, commemorating his status of one of the best singers of his generation.

Jarreau spent the remainder of that year touring the world and recording his next album, All I Got, which was released in 2002. This was followed by the Grammy-nominated Accentuate the Positive in 2004.

He celebrated his 30th year in the music business by pairing up with legendary R&B guitarist and singer George Benson for the album Givin’ It Up. Released to critical acclaim in 2006, the album garnered a 2007 Grammy nomination for Best R&B Vocal Performance by a Duo or Group for “Breezin’” and two Grammy Awards for Best Traditional R&B Vocal Performance and Best Pop Instrumental.

In 2008, Jarreau released Love Songs, a 14-track compilation of his favorite romantic tunes, and headlined the sold-out opening night of the Playboy Jazz Festival at LA’s Hollywood Bowl. He also released his first-ever Yuletide album, Christmas.

In 2009, Jarreau completed a six-week European tour, and released The Very Best of Al Jarreau: An Excellent Adventure, a 16-song collection highlight some of his best-known songs and one new track, “Excellent Adventure.”

After more than 30 years, Jarreau is undoubtedly one of the greatest performers and innovative vocalists the music world has ever known. He continues to tour extensively worldwide with his sextet and symphony performances and is working on a new album.