Multi-instrumentalist, composer, and clinician Lisa Bella Donna has had a prolific 2016 so far. She released Looking Out, Looking On (with cassette release by Kvltvre Kvlt Records) in June, Skylines (with cassette release by Scioto Recordings) in July, and is preparing to release a third album, Different Seasons, in the coming months. The Lisa Bella Donna Group will showcase her material in a concert presented by new local music streaming project Listen Columbus on Thursday, November 10th at 7pm at the Upper Arlington Public Library, 2800 Tremont Road. Her band for this free show will include Bella Donna on Fender Rhodes and synthesizers, Justin Campbell on drums, Jim Tussing on bass, and Stan Smith on guitar, a lineup you may know as Descendre. Keep reading for more thoughts on Looking Out, Looking On and Skylines:

Looking Out, Looking On was recorded in USA and Germany in February as a collaboration between Bella Donna and fellow multi-instrumentalist Andreas Scotty Botcher, along with additional contributors. The album explores the realms of experimental jazz and film music with a plethora of instrumentation. After building drama with textured opening tracks “Julie, Dear” and “Circle Of Candles,” Bella Donna and Botcher seize the listener’s attention on “While changing hands, Turbulent Times” with soaring keys that give way to an accelerated passage of more traditional piano and bass before ascending to even greater heights. Botcher’s sinewy bass marks the calm outset of “Entrance, Dusk,” and he later layers Rhodes keys for more groove, all guided by Bella Donna’s shifting drum work. Bella Donna’s moseying tape-affected Mellotron romp “Trust / Phantoms” and the lusciously layered “Love, 1967” set the stage for “Mountains,” the album finale that weighs in at almost 18 minutes long. Bella Donna and Botcher employ synthesizers, keyboards, basses and Bella Donna’s drums for an extraterrestrial odyssey that you must hear to believe! Sample and purchase Looking Out, Looking On here. 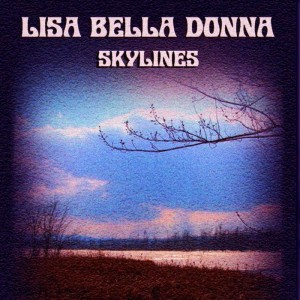 Skylines is more of a solo Bella Donna recording, though the album does include other talented musicians on several tracks. While “experimental” and “soundtrack” are still valid descriptors of the contents, there is also a strong element of jazz fusion present throughout. After explosive opener “Odessa,” the pensive but unpredictable “Alarcosbl” finds Bella Donna employing eight different instruments on a stirring adventure. The expansive title track is an impressive centerpiece, as Bella Donna builds a moody groove with her deep arsenal of instrumentation and audio samples, spreading the wealth to myriad melodic and background sources. The next three tracks are more pared down but just as detailed, with the sleek and funky Fender Rhodes and drums groove of “Snowflakes” and the breathtaking Rhodes solo track “Angela” both emotional highlights. “Signs & Rivers” takes an immersive trip into the wilderness, employing a strummed guitar to striking effect. The heavy fusion trio of “Clouds” and the buoyant frolic of “New Life” journey to fusion touchstones, before album closer “Volusia” sees Bella Donna issue a weighty final statement with synthesizer magic. Sample and purchase Skylines here.

Bella Donna has delivered two wonderfully nuanced albums in 2016 to date, both high in drama, emotion, and musical depth. Both albums are highly recommended to open-minded jazz listeners, so check them out online and hear tracks live on Thursday! Here are great videos from each album for a visual bonus: