Internationally-recognized jazz drummer, composer, and educator Dr. Mark Lomax, II continues to produce groundbreaking jazz at an astonishing rate. On Friday, June 3rd, Lomax will release two new albums on the CFG Multimedia label – Blues People by The Mark Lomax Trio and The Art Of Sound by The Ogún Meji Duo. As part of his enduring commitment to education, Lomax has announced that “10% of the profits from sales of the Blues Bundle – which includes digital downloads and hard copies of Blues People and The Art Of Sound as well as exclusive video footage from the recording sessions – will be used to fund arts programming for at-risk youth at the Boys & Girls Clubs of Columbus.” The two album bundle is available for preorder here for $20 – an excellent price for two albums of cutting-edge, socially-enriching new music, plus bonus footage, that will benefit a great cause! Stay tuned for details on concerts upcoming in June and August that will premiere additional new works, some in association with the ongoing August Wilson Festival. Keep reading for more details from CFG Multimedia:

Pre-Order The Blues Bundle (Blues People and The Art Of Sound) – to be released June 3, 2016, via CFG Multimedia – features the Mark Lomax Trio with saxophonist Edwin Bayard and pianist William Menefield, and The Ogún Meji Duo featuring Edwin Bayard

“The drummer’s music is as sharp as his perceptions are, and it swings magnificently.”
— All About Jazz

Dr. Mark Lomax, II has been empowering youth in Central Ohio for the last decade and now wants to use his art to help young artists achieve their dreams. “I think it’s our responsibility as caring adults to ensure that all young people have opportunities to be successful in the arts and any other career path they choose,” says Dr. Lomax, who is donating 10% of the Blues Bundle sales – which includes digital downloads and hard copies of Blues People and The Art Of Sound as well as exclusive video footage from the recording sessions – to help fund arts programming at the Boys & Girls Clubs of Columbus because he believes that “art can change lives.” 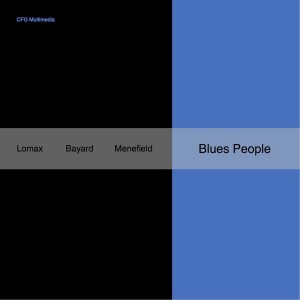 The Mark Lomax Trio – with the drummer-leader joined by saxophonist Edwin Bayard and pianist William Menefield – has recorded a boldly dynamic seven-movement suite incorporating themes from recognizable Negro Spirituals and free improvisation to tell the story of an ongoing struggle for human rights in America. Inspired by the work of LeRoi Jones (Amiri Baraka) and August Wilson, Blues People brims with thematic unity and improvisational fire in the spirit of works by Ellington, Mingus and Coltrane. The Mark Lomax Trio is a telepathic unit, colored by Bayard’s moving, muezzin-like keening, Menefield’s powerful approach, and Lomax’s detail-rich drums that drive the music with a composer’s will. The movements are continuous and feature the talents of each player in solo, duo and exciting full ensemble sections. This is exciting, affecting music, accessible to all lovers of jazz past and present.

Recording as The Ogún Meji Duo, Lomax and Bayard have followed their politically potent 2014 studio album, #BLACKLIVESMATTER – which Chris Monsen declared to be music that “rumbles and pulsates…also melodic and resonating,” and Jazz da Gama said the album is the group’s “greatest gift to jazz” – with a powerful and inspired work of art with The Art Of Sound which gives equal prominence to composed and improvised themes and recalls the work of legendary sax/drum duos by John Coltrane and Rashied Ali, Kidd Jordan and Hamid Drake, and David S. Ware with Rashied Ali.

The release of Blues People and The Art Of Sound follows Lomax’s lauded 2014 studio album, Isis & Osiris – which Downbeat declared to be music with “biting emotional and artistic clarity,” All About Jazz called the album a “vibrant and utterly contemporary syntheses of post-modern jazz, Egyptology, and Black Awareness” that “re-inhabits the spirit that made all those albums on Impulse!, Black Jazz, and Strata East such rewarding musical and intellectual experiences.” Bop-N-Jazz called the recording “a stunning, soulful, and soul filled excursion.” And JazzColumbus summed up the virtues of the previous album in a way that applies equally to Blues People: “The result is a cohesive body of work that tells these stories though beautifully emotional spiritual jazz.”

The Blues Bundle is a part of Dr. Lomax’s ongoing efforts to use art as a means of optimizing human potential. 10% of the profits from sales of the Blues Bundle – which includes digital downloads and hard copies of Blues People and The Art Of Sound as well as exclusive video footage from the recording sessions – will be used to fund arts programming for at-risk youth at the Boys & Girls Clubs of Columbus.

Dr. Mark Lomax, II has spent a lifetime in music. He grew up singing and playing drums for his mother’s choirs and by 14, Lomax began to develop impressive jazz credentials. Lomax has worked with the Delfeayo Marsalis Sextet, Clark Terry, Marlon Jordan, Ellis Marsalis, Victor Goines, and has recorded with Billy Harper, Azar Lawrence, and Bennie Maupin. Jazz Times says Lomax’s “forceful drumming would have made Elvin Jones proud.” Mark holds a Doctor of Music Arts degree from The Ohio State University and his myriad experiences have allowed him to create a wonderful blend of styles in his music.