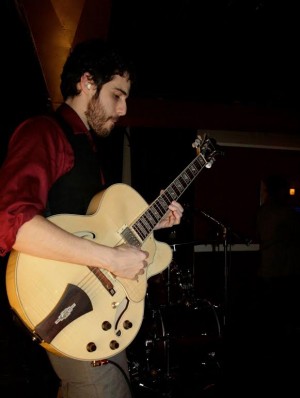 Alex Schrock is a guitarist, composer and teacher in the Columbus area. Originally from Canton, Ohio, Alex began playing bass at age 12, then switched the guitar in high school and never looked back. He received his bachelor’s in music composition from the University of Akron and his master’s in music composition from Cleveland State University. While in Cleveland, Alex studied with Cleveland jazz legends Bob Fraser and Rock Wehrmann. Alex also played in many acclaimed groups in Northeast Ohio, including the Mahavishnu Orchestra Project, Paul Stranahan’s Insomnia and Moises Borges.

Now in Columbus, Alex leads his own groups in addition to being an in demand guitarist for jazz, soul, and hip-hop groups. He has played with EOP, Ill Poetic, Vaughn Wiester’s Famous Jazz Orchestra, Roxie the Soul Butterfly and more.

Alex has recently released a new trio album titled “Punk Jazz” comprised of all original music, featuring Chad Greenwald on bass and Ryan Jewell on drums. You can download it here and read JazzColumbus’ review here.

Alex is also active in Gradient Prophet (GP) – a project that fuses electronic music with live instruments and improvisation. GP is an eclectic mixture of hip-hop, downtempo and jazz that shows him working with a wide range of materials. He recently released an album of samples taken entirely from the progressive metal group Animals As Leaders and another of Akron based jazz group bluelight. He frequently features guest instrumentalists (Dan White, Chris Coles) and emcees (Ill Poetic) and mixes diverse electronic threads with his own playing. Gradient Prophet is a style without a style; a series of points that connect to lead you somewhere else.