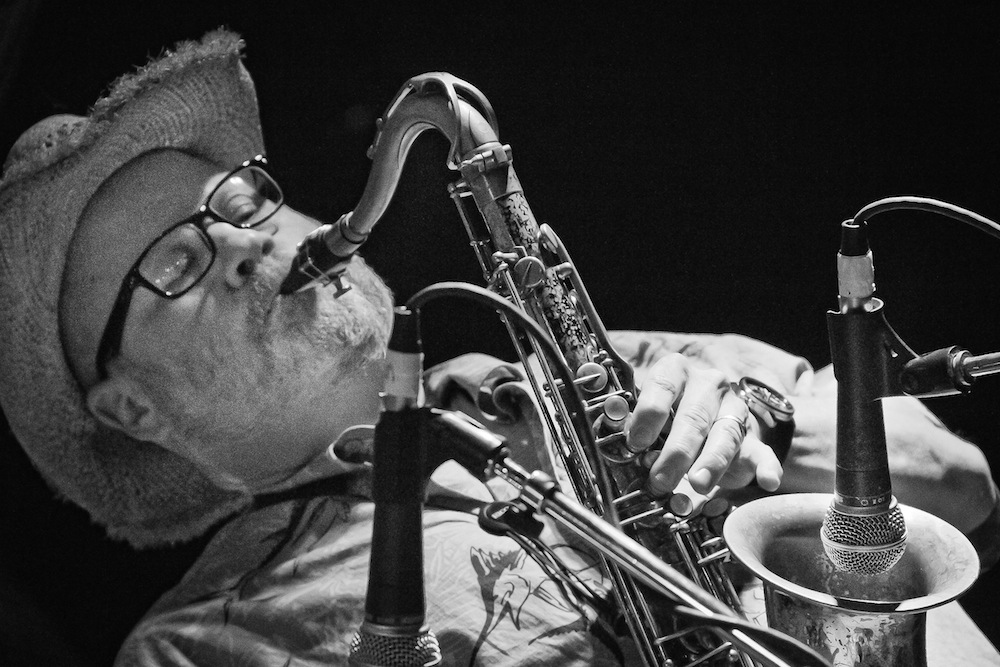 Saxophonist Randy Mather has been a fixture in the Central Ohio jazz scene since his first professional appearance at the age of fifteen, with the legendary jazz organist, Don Patterson. He accumulated multiple “outstanding jazz soloist” awards in high school and while performing with the internationally acclaimed OSU Jazz Ensemble in the late 70’s.

Most valuable player award must go to tenor sax player Randy Mather. He sits there seemingly unconcerned, looking like a young Buddha, seldom looking at his parts, yet never missing a lick. But when he stands to solo, he sounds as if he’d absorbed all the soulful sounds of the great tenor m en from the ’30s and ’40s. – Harvey Siders, L.A. Times

After tours throughout Europe and The United States,Randy returned to the Columbus music scene as the featured tenor saxophone player in the popular group, The Seeds of Fulfillment featuring Jeanette Williams, and playing with Sanctuary, and the Columbus Jazz Arts Group. In 1980 he received an invitation to play with the critically acclaimed, Woody Herman and The Thundering Herd orchestra.

While his passion is jazz, he is able to effortlessly adapt to any music genre. His range and versatility have enabled him to perform with a diverse group of musicians and entertainers, sharing the stage with R&B legend, Aretha Franklin during a Midwest tour, and Mark Flugge’s Chamber Jazz Series, to the completely other end of the spectrum with Jim Maneri s trance/ house/ jazz group, Flypaper! In addition, Randy has shared the stage with renowned artists;Dexter Gordon, Hubert Laws, Rassan Roland Kirk, Lew Tabackin, David Sanborn, Phil Woods, Louie Bellson, Doc Severinsen, The Spinners, Kim Pensyl, and Foley. And, in the Central Ohio area, know n for a wealth of talented musicians, Randy has been a featured soloist and performed with; Rusty Bryant, Gene Walker, Hank Marr, Joe Diamond, Mark Flugge, Roger Hines, Mark Frye, Doug Richeson, Aaron Scott, Bobby Floyd, Dave Powers, Tony Monaco, and Willie Pooch, among many others.

Mather has a sound that recalls Michael Brecker in ways, especially in his large, round, technically fulfilled sound, but also in his hard-boiled, teasingly approach to blues. – Gerard Cox, allaboutjazz.com

Over the years, as a surprise gift to his wife for Valentines Day, Randy would secretly record a favorite song or ballad to present to her. In 2008, Randy recorded and produced a CD of many of these tunes, featuring talented musicians; Kim Pensyl, Mark Flugge, Doug Richeson, Dave DeWitt, and David Weinstock. The final product was a warm and romantic CD titled, “Valentines Day”. 100% of all proceeds from the sale of his CD have been donated to The Opportunity Foundation of America, specifically for their Eagle Eyes project, a cause close to his heart. To date, over $6,000 has been raised for this non-profit organization. (www.ofoa.net)

I’ve known and admired Randy’s sax playing since the late ’70s when he was a member of the Ohio State University Jazz Ensemble. His new CD, Valentine’s Day, is absolutely great! Randy’s sound is huge, soulful, and so musical. His interpretations of these well-known ballads are creative and perfectly performed. It’s truly a pleasure to listen to him make such great music. – Tom Battenberg, former Director OSU Jazz Ensemble